When Sony WF-1000XM3 came out, not many true wireless earbuds could offer the same level of active noise-canceling, and sound quality with punchy bass. Fast forward to the present day and competition has grown bigger, from Apple AirPods Pro to Sennheiser Momentum True Wireless 2.

All of that makes them extremely close to Sony WF-1000XM3. But how do they compare in individual categories? Which ANC does a better job? Can you work out in both? Let’s find out in the comparison below.

You can check full reviews here: 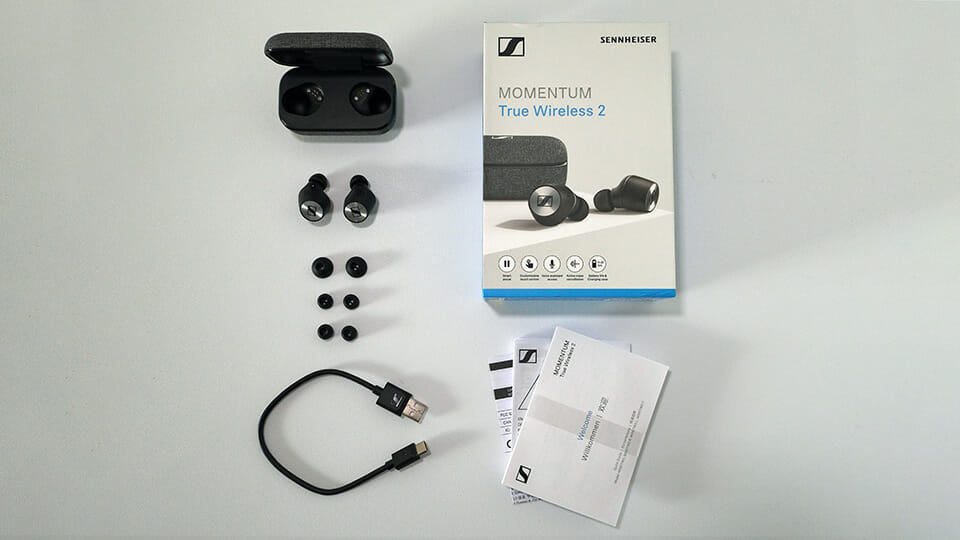 With packaging you’re getting:

Momentum True Wireless 2 have slightly better ergonomics that fit most people. While WF-1000XM3 can also be quite comfortable, their Tri-Hold design doesn’t work for all.

In general, Sennheiser’s earbuds are more comfortable, with ergonomic housing that fits most people. As with many true wireless buds, you need to master the proper insertion; otherwise, you might mistake them as being too big.

Fit is also great, despite the lack of ear fins or hooks. They stay nicely in your ear even when going for a run, albeit they do bounce a little. However, the latter is quite common in the majority of true wireless headphones.

Sony WF-1000XM3, on the other hand, offer the same level of fit, but with comfort that is somewhat of a mixed bag. Some users will say that they can wear them for multiple hours on end without any problems, whereas others will start complaining about irritation after 30 minutes.

That is due to their Tri-Hold design, which should complement the inner ear’s natural structure, grabbing all the right places for better stability. However, since not all people share the same exact ears, you might end up either loving or hating their comfort. 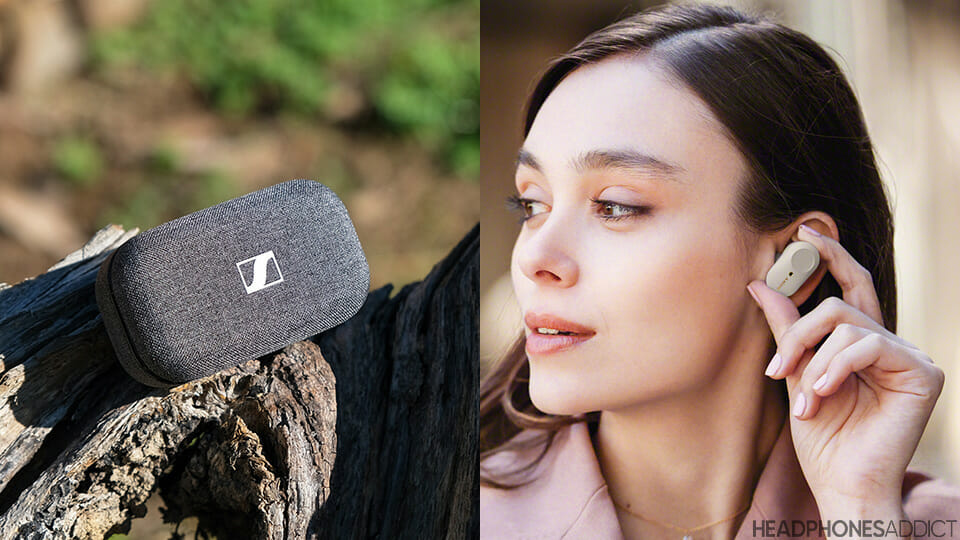 Therefore, if you want to play it safe, Momentum True Wireless 2 are a better option. The one redeemable thing about Sony is that they come with 7 pairs of ear tips inside the box, compared to 4 pairs that you get with Sennheiser.

Active noise-cancelling performance on both is comparable. They do an excellent job when eliminating low frequencies while struggling a little with the high end of the spectrum.

Since these are still small true wireless earbuds, you can’t expect the same cancellation level as larger headphones. But, if you explicitly want wireless earbuds for that, then these two are the best options, apart from Apple AirPods Pro.

Starting with low-end noises, both do a fantastic job. If you’re bothered by engine noises or other appliances around you, these are worthy of consideration. However, the higher in the frequency you go, the lesser is the noise-canceling effect.

People’s chatting is slightly muted, but not by much. And, when you’re outside walking in the woods, ANC can’t block bird’s chipping. High-pitch sounds are still too random for even the best ANC wireless earbuds to eliminate them.

When it comes to cancelling speech, there are minimal differences between the two. In some cases, Sennheisers might be better than Sony. Of course, nothing is definitive, since one firmware update can change everything.

Also worth mentioning is that inside the Sony Headphones App, you can tweak the ANC intensity, which is something that Sennheiser can’t do. 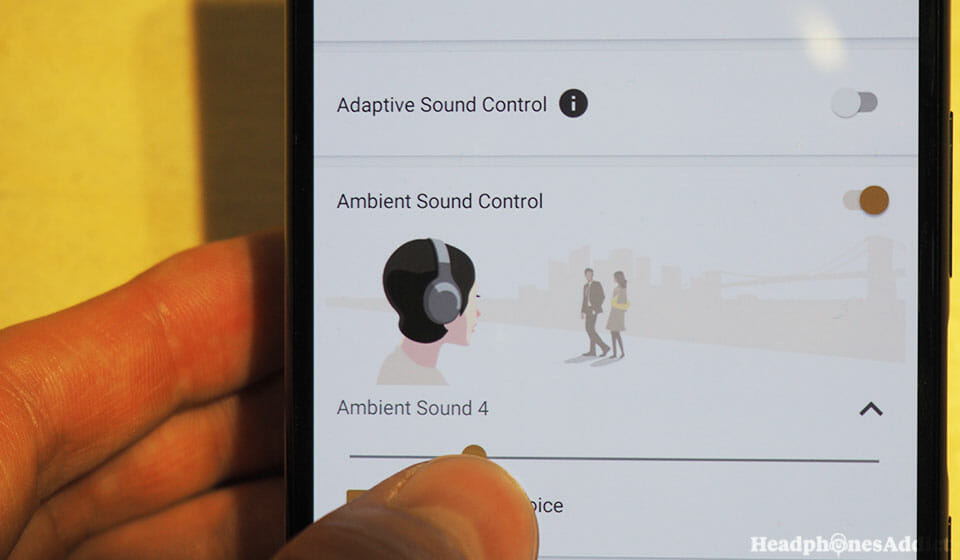 Both are great in terms of connection stability and range, but Momentum 2 are slightly better thanks to Bluetooth 5.1. Though WF-1000XM3 still have a few tricks up their sleeve.

The connection is reliable with a great range. Sony offer Bluetooth version 5.0, with improved antennas, whereas Sennheiser provides you with BT version 5.1, making them more efficient.

Both go beyond 1 brick wall but start stuttering as soon as you want to pass the 2nd wall, a common occurrence with Bluetooth 5.0. Pairing them is super easy, with Sony’s supporting NFC as well.

There are small differences in Bluetooth codecs:

Interestingly, despite Sony’s lacking the aptX, their audio lag in videos and games is noticeably lesser than with Sennheiser. There is a workaround to fix the issue with Momentums, but you need to go into Developer Options (on Android) and force Momentum 2 to use SBC instead of aptX.

Sony’s are also supporting their own DSEE HX audio processing, which upscales lossy audio files. However, the difference is minimal and unnoticeable to the untrained ear.

None of them offer multipoint support, which is somewhat disappointing.

Sony WF-1000XM3 wins by a smidge, giving you roughly an hour of extra battery life with or without noise cancellation.

While Sennheiser improved the overall battery life on Momentum True Wireless 2, with their seven hours of playtime, they still can’t match the 8 hours on Sony. The same goes for the ANC, in our test, we got around 4 hours with Momentums and 5 hours with Sonys. 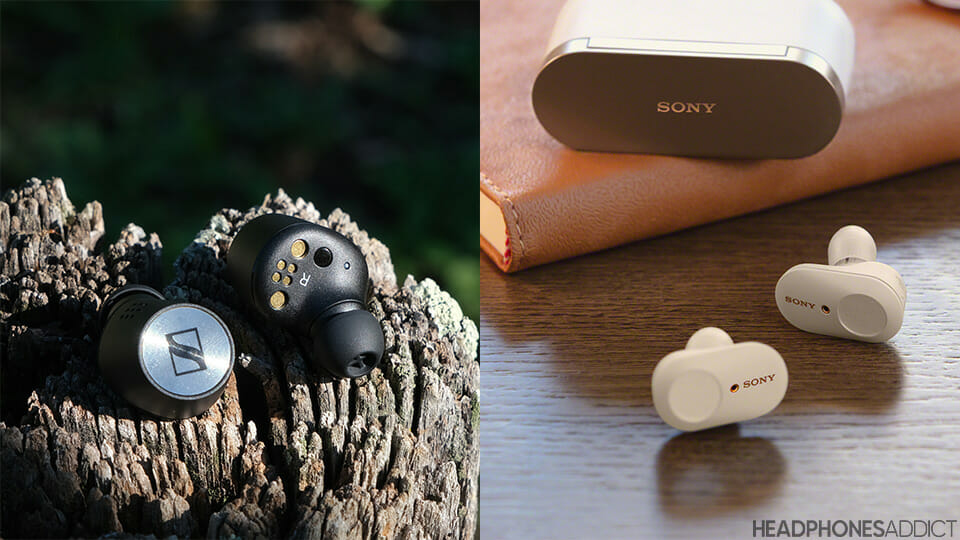 Both earbuds come with a USB-C port and support fast charging with similar levels of efficiency.

You get the same 1.5-hour boost from a 10-minute charge. Sadly, neither offers wireless charging.

Even though neither are designed to experience harsh conditions, Momentum True Wireless 2 are more robust, with an IPX4 rating and a sleeker case.

If you want earbuds for outside workouts, Momentum 2 are a more reliable choice. That is not to say that Sony’s are bad. They still fit well and are more than fine for sports activities.

The main problem is that Sonys don’t have an IP rating, meaning a little sweat can damage them. While they would probably surive getting soaked in sweat, you shouldn’t gamble with expensive gadgets like WF-1000XM3.

In contrast, even though Sennheiser Momentum 2 are purely audiophile earbuds, they can easily resist a bit of sweat and even light rain. With their IPX4 rating, they’re sweatproof and can also survive light splashes of water.

Both charging cases feel exceptionally well built, with good quality hinges. Momentum’s case might look and feel a bit more premium since it’s more compact and is covered in fabric.

You’re getting a bunch of features on both sides, but in our opinion, Sony’s are just a little bit better.

Sony WF-1000XM3 wireless headphones emphasize their sound and their features. When you download their mobile app, you might get overwhelmed by how many options you have. Well, Sony WF-1000XM3 might offer slightly fewer things than their bigger brother WH-1000XM3, but they are still well packed. 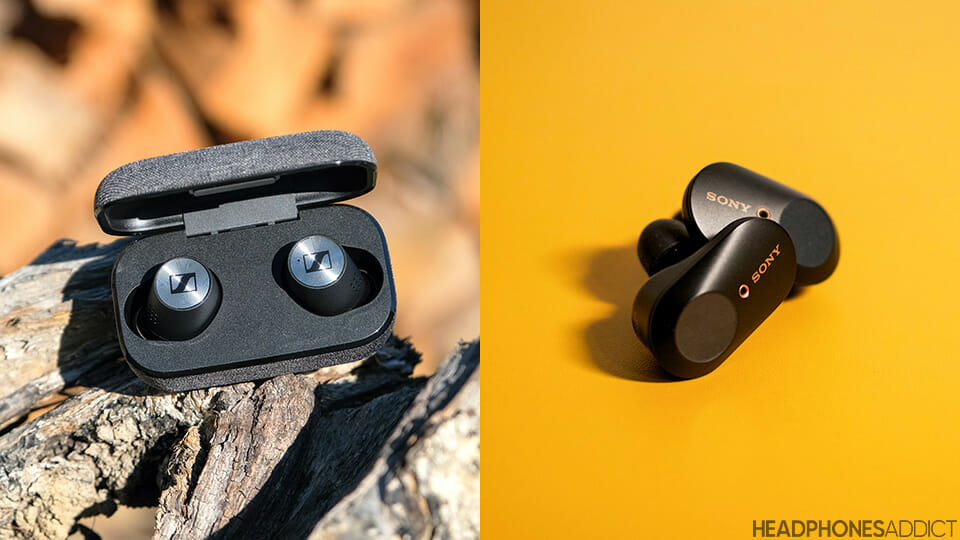 But let’s start with what is similar between the two. Both have active noise cancellation and can amplify your surrounding with dedicated Ambient modes.

There is also a smart pause/play feature and an audio equalizer. The latter is more in-depth in Sony, giving you more frequency bands and a dedicated bass slider. Both can also summon Google Assistant with your voice command.

You can also change touch commands on both, but strangely there is no volume control on Sony earbuds. Sennheiser Momentum 2 offer that while also being more intuitive about it. There is a faint beep every time you press to let you know that you actually touched them.

To finish with microphone performance, you’re looking at two similar performers. None of them are impressive, but they’re still usable if you don’t have anything else with you. Just don’t take phone calls in a super noisy environment.

You can expect excellent sound coming from both, but their signatures will appeal to different people.

You won’t be disappointed with either of these when it comes to audio quality since they’re both fantastic. At least when you’re comparing them to other truly wireless earbuds.

However, they are tuned differently. While they both have punchy bass, Sony WF-1000XM3 are a bit more exciting and fun to listen to, whereas Momentum True Wireless 2 offer a more refined sound and a bigger soundstage.

Sony’s have a more engaging sound that appeals to the masses. The bass goes low and has a nice rumble. The midrange and treble are a bit more upfront than Sennheiser’s, becoming slightly fatiguing if you like to listen to your music out loud.

Momentum 2 are smoother, with a slightly recessed midrange, which to some, might seem veiled. Play a little with EQ, and you can bring their sound to live, adding more mids and air into the treble.

Detail retrieval is excellent on both, but you get more micro details with Sennheiser Momentum 2. 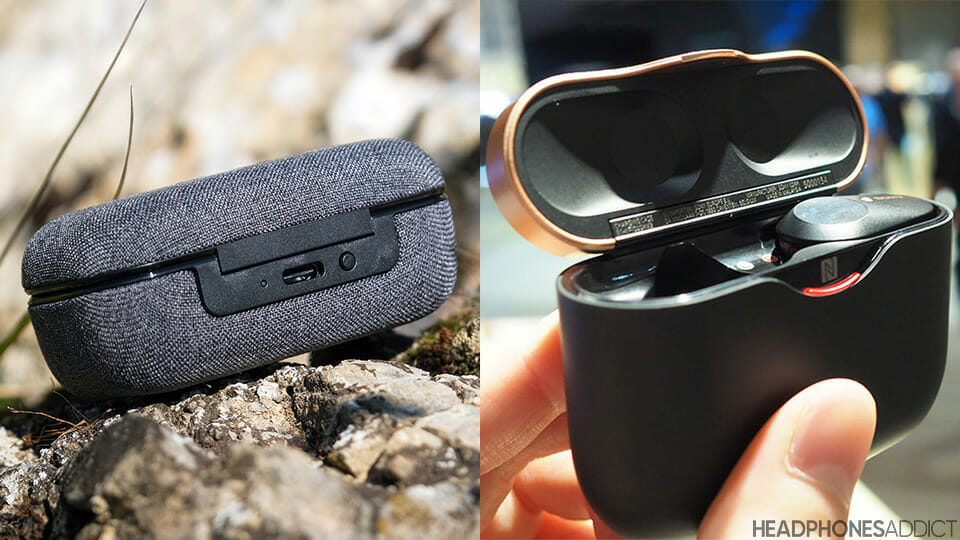 Should You Buy Sennheiser Momentum True Wireless 2 vs. Sony WF-1000XM3?

Even though WF-1000XM3 are more than one year old, they’re still more than capable of providing both premium listening experience and features. And with their price declining, they’re becoming a much better value for money.

Momentum True Wireless 2 are equally as good, if not even better in some areas, but not by a lot. That is why it’s hard to recommend them over what Sony’s are offering. Mainly because of their price, which is still $300. In contrast, WF-1000XM3 are selling for under $180.

You might still want to consider going for Sennheiser’s earbuds if you’re looking for the best true wireless earbuds in sound quality, and you desperately want a pair with IPX4 sweat resistance.