An average adolescent spends around 7.5 hours every day looking at the screen.

Are you curious to know what age group has the highest screen time?

More on that in the article below. 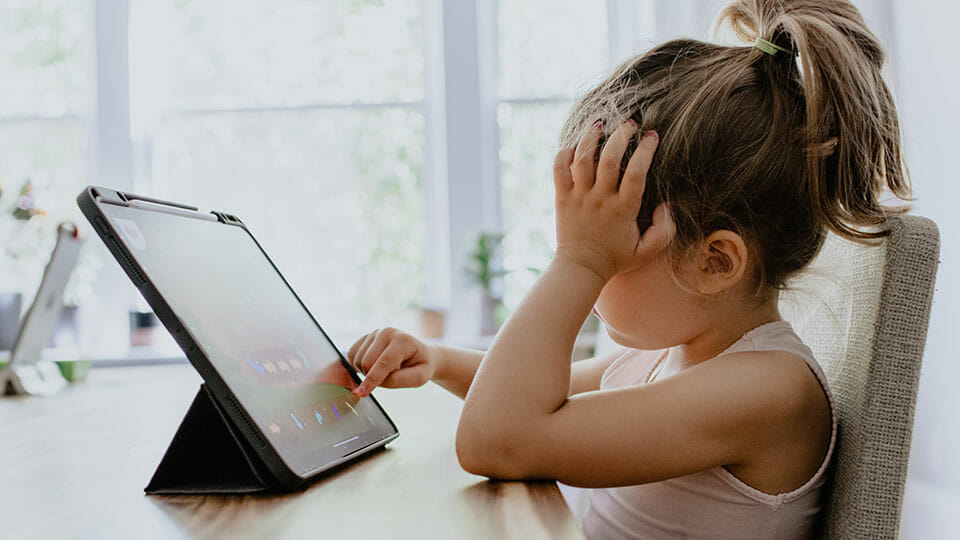 How much time does an average teenager spend on social media

How much time does an average teenager spend on phone

How much time do kids spend watching TV

US teenagers between 11 to 14 years old spend 9 hours in front of the screen daily.

Kids between ages 0 to 8 have on average 2.5 hours of screen time.

More concerning is the data on toddlers, where only 1-year-olds spend 53 minutes on average looking at the screen daily.

Two-year-olds and below had an average of 49 minutes of screen time, whereas kids between 2-4 years averaged 2.5 hours per day.

3-year-olds have around 150 minutes of daily screen time, and the ones between 5-8 years had 3+ hours on average.

Interestingly, the kids between 7-8 years had only 90 minutes of daily screen time.

51% of American parents allow children to spend more than 3 hours per day in front of a screen.

Outside of homework, 15% of children were allowed to have less than an hour of screen time, whereas 34% had 1-2 hours.

35% of parents use gadgets to entertain their kids, while 23% say they allow gadgets because they want their kids to master using technology.

What’s the recommended/healthy screen time for a teenager?

Children aged 5-17 shouldn’t have more than 2 hours of screen time per day, according to OSF Healthcare.

Recommendations according to OSF Healthcare and Screentime.

Most of the child’s screen time represents watching TV at 73%.

Studies have shown that kids under the age of 2 don’t learn much from watching videos.

It appears that while they’re captivated by what they see on screen, they don’t understand the context. Meaning that watching TV doesn’t bring any benefit to them.

How much time does the average teenager spend on social media?

In 2018, youngsters between the ages of 16-24 spend on average 3 hours and 1 minute per day browsing social media.

A 2015 study found that teenagers between 8 and 18 years spent 7 hours per day consuming entertainment media, including social media platforms.

During Covid-19, around 51% of youngsters aged 8-23 admit to watching more online video content.

What are the consequences of using social media?

The UK study shows that girls are especially vulnerable when exposed to too much screen time on social media.

How much time does the average teenager spend on their phone?

An average teen spends around 7 hours and 22 minutes daily on their mobile devices.

Between ages 8 to 12, an average person spends slightly less at 4 hours and 44 minutes per day.

How much time does the average teenager spend on their phone as opposed to recommended time?

An average teenager spends around 7 hours and 22 minutes per day on the phone, whereas recommended screen time is set at no more than two hours max.

Even tweens use their smartphones too much at 4 hours and 44 minutes per day.

How much time do kids spend watching TV?

On average, kids between the ages of 8 to 18 spend 4.5 hours per day watching TV.

Here’s a table of an overall screen time by kids age group:

Kids with restrictions had, on average, 2 hours and 52 minutes less screen time than kids without restrictions.

How much TV do kids and teenagers watch as opposed to recommended time?

On average, kids and teenagers watch 4.5 hours of TV per day, whereas the recommended screen time is 2 hours max per day.

That means kids and teenagers watch 180% more TV than the CDC recommended time.

There were the latest screen time facts and statistics. In general, adolescents spend way above the recommended time in front of screens. And the pandemic only made things worse.

Please let us know in the comments below.

Best Headphones for Toddlers in 2022 (and why avoid regular headphones)

Good headphones for toddlers need to have a specific feature that most headphones don't have. Otherwise, they can be dangerous. Find out more here.
| 5 min read

This is the most comprehensive list of anime statistics and facts. How many people watch anime, market size, demographics, and more.
| 5 min read

Here are the latest metaverse stats in 2022. Find out the market size, how many people use it, and what they think about it. Plus much more.
| 13 min read