Also, did you know there are 4 different Amazon Music subscriptions?

Learn more down below. 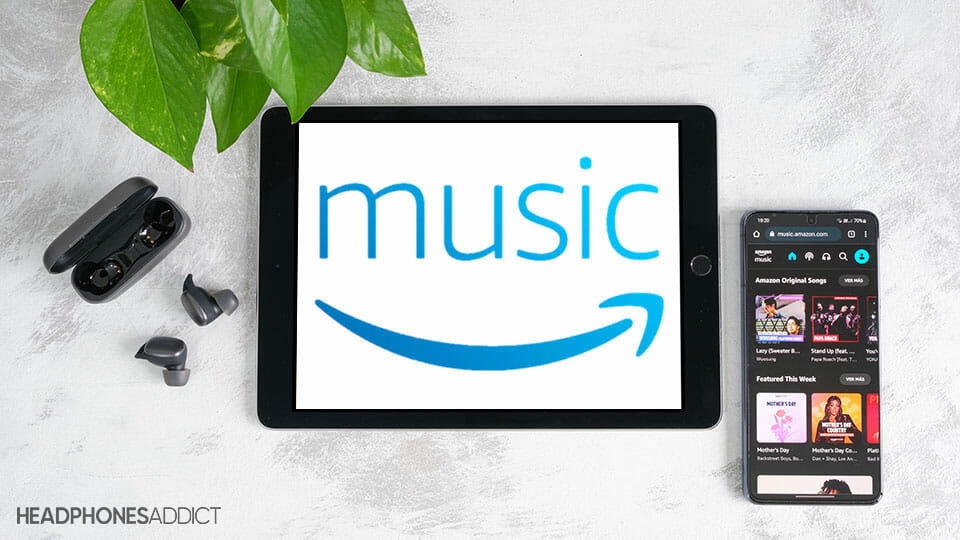 What is Amazon Music?

What is the difference between all 4 Amazon Music versions?

Amazon Music Free works without entering your credit card info and is limited to a selected number of songs. You get to watch ads and have a limited number of skips.

Amazon Music Single-Device plan comes with Amazon’s Echo or Fire TV devices and only allows you to stream music via their smart speakers.

Amazon Music Prime comes with Prime membership at no extra cost, has unlimited skips, and is ad-free. However, you only get access to 2 million songs.

Amazon Music is the third most subscribed music streaming service in the world.

See the latest numbers on:

Also, learn what drives the sales of Amazon Music subscriptions.

How many people use Amazon Music?

Amazon Music streaming service had around 68,1 million users in Q2 2021.

The number was calculated from the market share graph published in MIDiA Research.

Based on Counterpoint research from Q1 2020, Amazon Music more than doubled its subscription count.

In 2020, Amazon Music more than doubled its user base in these countries:

Amazon Music’s estimated year by year growth in the US is 5.3% (Emarketer).

Amazon Music already has more than 48.3 million US listeners.

Statista did the forecast based on user count growth from 2017 to 2020.

This is an estimation based on 5.3% year-by-year growth (Emarketer).

This is the data from a survey conducted in December 2020 (Statista 2).

Japanese males are more likely to use Amazon Music than females.

Of them, around 20% of males confirmed they were using Amazon Music, whereas only about 13.5% of females said the same (Statista 3).

Nearly half of all new UK users subscribing to music streaming services have chosen Amazon Music.

They did so through Amazon Prime Video or Amazon Unlimited subscriptions, which offer discounted prices.

46% of US users who bought digital music or streaming service subscription have done so through Amazon Music.

The data represents the period of the last 12 months (Statista 4).

Amazon Music was the second most used music streaming service in Spain in Q4 2021.

The biggest is Spotify, having close to 80% of all market share in Spain (Statista 5).

Learn about monthly and yearly revenues from various countries.

Amazon Music earned a total of $27,62 million from Japanese customers in 2021.

From January 2021 to December 2021, monthly app revenue in Japan was steadily increasing, starting at $1.72 million (January) and reaching $2.78 million by the end of the year (Statista 6).

In Japan, Amazon Music is the second biggest music streaming service in terms of revenue.

iPhone users in Great Britain spend the most money on Amazon Music out of all music streaming services.

Data from February 2022 suggests that Amazon Music generated $623 thousand in revenue from iPhones in Great Britain.

With over $413 thousand, YouTube Music had the second-biggest monthly revenue (Statista 8).

iPhone users in Italy spent close to $46 thousand in Amazon Music in February 2022.

That puts Amazon Music in second place, only bested by YouTube Music, which generated around $50 thousand in revenue (Statista 9).

iPhone users from Germany generated around $7.3 million in monthly revenue (February 2022) in the Amazon Music app.

Deezer was second with $1.8 million, followed by YouTube Music with $154 thousand (Statista 10).

How many songs does Amazon Music offer?

That’s on par with Apple Music and Deezer. However, you only get access to a music library of 75 million songs in some regions.

Amazon Music is only available in 49 countries worldwide.

That’s far behind the competition like Apple Music, which provides its services in 167 countries.

And even within those 49 countries, not all can access Prime or Free subscriptions. Their only option is an Unlimited plan (Amazon 2).

How does Amazon Music compare to other streaming services?

Apple Music is taking a similar approach, but its service isn’t operating yet.

What are the most popular playlists on Amazon Music?

The most followed playlist on Amazon Music in the USA is “Country Heat.”

The third is “All Hits.”

Amazon Music pays $0,004 on average per stream to an artist.

That puts it neck to neck with Spotify and among the least-paying music streaming services.

Amazon Music is Japan’s most popular music streaming app, with 6.42 million downloads in 2021.

That’s followed by Spotify and Pokekara, both reaching over 5 million downloads in 2021 (Statista 12).

Amazon Music was the 5th most searched music streaming platform worldwide in 2020.

The most searched music streaming platform in 2020 was Spotify, with 26 million monthly searches (Statista 13).

Is Amazon Music as good as Spotify?

Amazon Music is another one of the major streaming services that don’t like talking about its stats in official reports.

Nevertheless, we hope we found all the interesting statistics and fun facts about the Amazon Music you were looking for.

Let us know if we missed any. Tell us what else you want to know about Amazon Music down in the comments.

Check out the latest Apple Music statistics. Learn how much Apple Music earns, how big is its market share, how popular is among users, and many more.
| 5 min read

This is a complete list of the latest stats on people listening to music, how much time they spend, how many people listen to music and more.
| 9 min read