Bose was the first company that offered active noise-canceling headphones. And their Bose 700 headphones are among the best on the market.

But other companies joined the race and Sony with WH-1000XM4 is their main competition.

But which ones are better and why? 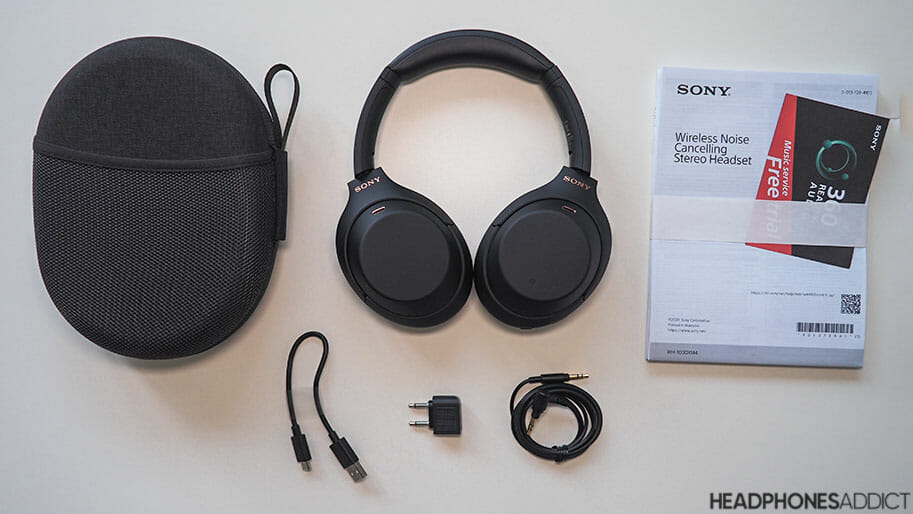 Both of these two headphones exhibit fantastic comfort, but Sony did a few welcome changes to their model, which results in a more comfortable experience over extended listening sessions.

XM4 have slightly slimmer earpads than the predecessor, providing more room for your ear lobes while reducing skin contact. That means your ears will sweat less compared to XM3.

However, compared to Bose 700, the difference is much more negligible. Both feel exceptionally well, even after a few hours of use. But, 700’s headband can start pushing on your head a bit too much.

That is something Sony headphones don’t exhibit, making them overall better if you tend to use them on longer rides or flights.

Clamping force is about the same on both, providing good stability so that they don’t fall off your head if you need to catch a bus or quickly run downstairs.

There are very few differences between the two when it comes to eliminating noise. However, if you also like to call people, Bose takes the crown.

There aren’t many reasons to buy one over the other if you’re looking strictly at the active noise-canceling performance. Both headphones do an incredible job drowning out your surroundings. Constant noises like engines from various sources are almost entirely gone.

The busier the noise, the harder it’s to eliminate it. For example, people’s chat is still one area where neither of the two are perfect. However, they can still bring down that chatter to almost whisper levels.

If we start to nitpick, we might say that Sony WH-1000XM4 are a bit better when it comes to canceling noise. They do a slightly better job with midrange frequencies, but the difference is minimal.

However, things turn in Bose Noise Cancelling Headphones 700 favor when you introduce phone calls. Bose’s headphones are much more effective at canceling out background noise, while also keeping your voice clear and understandable.

On the other hand, Sony is also doing a good job maintaining excellent voice clarity, but it can’t eliminate as much background noise.

Therefore, is you’re looking for something to enjoy the silence on your travel, either will do. But if you also want to take phone calls, Bose 700 are the better option. 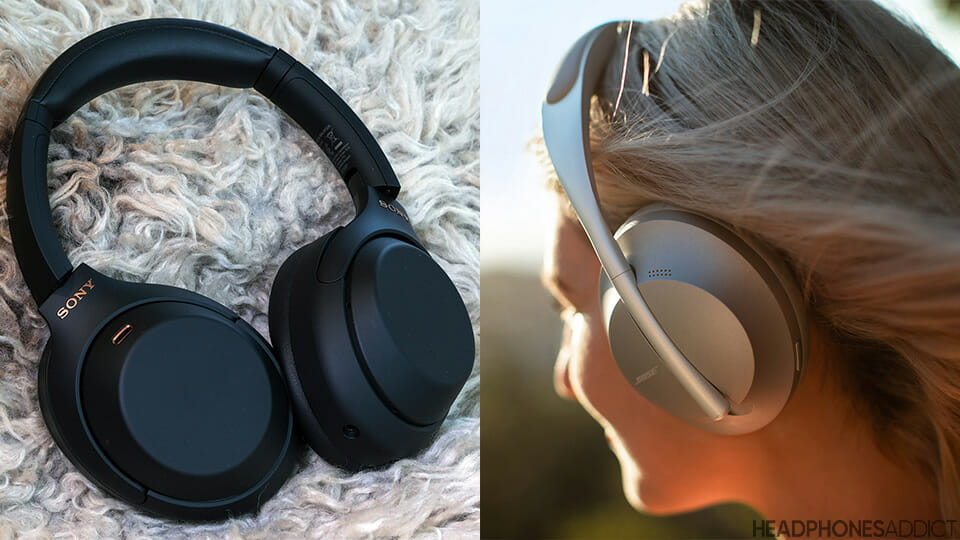 The connection shouldn’t be an issue since both headphones come with Bluetooth 5.0 with good coverage. Only when you place 2 brick walls between them and the transmitting device, you start to hear distortion and audio dropouts.

When it comes to audio codecs, Sony takes the lead just by a smidge, despite removing aptX and aptX HD with their new WH-1000XM4’s. Both headphones support SBC and AAC, while XM4 adds their LDAC in the mix. The latter is still the most Hi-Fi codec for audio quality and is supported by all Android devices.

Thankfully, even though Bose 700 only have AAC, this codec is still good enough to provide lag-free video watching on your phone. It works a bit better on iOS, but the difference isn’t that big on Android.

Bose 700, as well as Sony XM4, can connect to two devices at once. On both, the feature needs to be enabled inside the mobile app. Bose’s approach is a bit more straightforward since you can switch between devices inside the app, without fiddling inside Bluetooth’s menu.

Even though Sony WH-1000XM4 have the same battery as their predecessor, they’re still much better than Bose 700.

Bose Noise Cancelling Headphones 700 can hold up to 20 hours of battery with the ANC enabled. That is still a good run time, but many other brands can do better when it comes to simultaneously eliminating noise and playing music.

On the opposite side, Sony WH-1000XM4 provide around 50% more battery on a single charge than Bose. They can last up to 28 hours (30 hours advertised), resulting in an extra day or two of use, depending on your habits.

Another area where Sony headphones completely wipes the floor with Bose is the quick charging.

These two are both premium-made headphones, but Bose takes it a bit further.

None of them feel cheap or easily breakable: quite the opposite. Sony’s are made from premium-feeling plastic that is rubberized and feels soft to the touch. While it’s technically still plastic, it gives you the confidence you’re wearing something exquisite.

Hinges turn without any friction, while the folding mechanism seems sturdy and ready for years of use. Earpads are a bit shallow and might appear somewhat empty, but they’re soft and also premium-feeling. However, it would be nice if the user could replace them, but they seem permanently attached.

In contrast, Bose 700 are much bolder in its design, with cleaner lines and a more modern look. Sadly, that comes at the cost of a folding mechanism, which some might miss. To make the slightly higher price more understandable, 700’s have stainless steel headband, with a fair amount of padding. 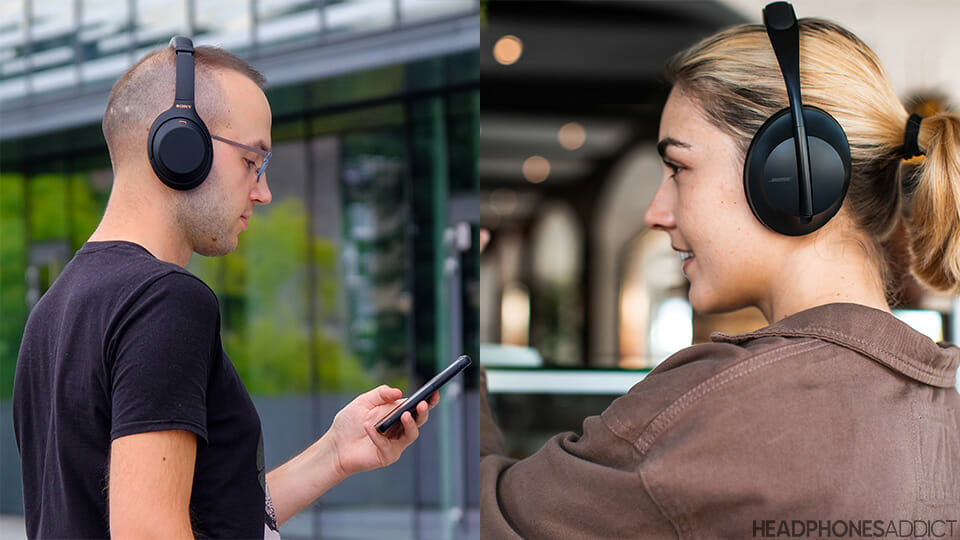 Both headphones offer great sound quality to enjoy your favorite music to the fullest.

While the earpads are also permanently attached, Bose’s choice of pleather feels just a smidge more premium. The difference is subtle, but it just feels more durable when you rub it against your skin.

None of these two headphones are ready to hit the gym, or at least, not to be drenched in sweat. There is no IPX rating on board, and because of the pleather pads, your skin will become sweaty pretty soon.

Until now, you probably can’t find a more feature-rich package as with XM4. Despite all the things these headphones offer, their mobile app is surprisingly straightforward to use. Let’s start naming all the cool stuff Sony’s have compared to Bose Noise Cancelling Headphones 700.

Firstly, a much better sound equalizer. You can tweak multiple frequency bands while also adjusting bass separately. Bose can only offer “bass, midrange and treble” with + and – to change them.

Sony’s Headphones Connect app also provides you with noise-canceling calibration, which calibrates the ANC depending on your environment for optimal performance. There is also 360 Reality Audio calibration, making you take a selfie of your ears to adjust the surround effect.

There are also new proximity sensor for automatic pause/play feature and Speak-to-chat, which can be useful to some, but we found it a gimmick. Last but not least, you get the DSEE HX Extreme audio processing, which takes the compressed audio formats (like mp3 or AAC) and boosts its clarity. The difference is barely noticeable, but we mostly use FLAC in our test.

Apart from that, both headphones have similar things that you can tweak. For example, the intensity of the noise-cancellation, or how much ambient noise you want to let inside. Both also exhibit touch controls with different gestures. They’re very responsive on both ends.

While Bose is closer to being neutral, the Sony adds more bass, which makes them much more enjoyable.

Bose knows how to make great-sounding equipment. Sometimes you can’t understand how a tiny speaker sounds that good. Bose Noise Cancelling Headphones 700 are taking a similar approach here, with a great, balanced sound. However, it’s somewhat dull compared to what Sony is offering.

Sony’s are much better at basically all frequency ranges. Bass is not only higher in quantity but also in quality. It can go deeper while maintaining better control and detail.

A similar story continues in the midrange, where that extra bass adds a little warmth, making the overall sound fuller in comparison. It’s also more natural and dynamic as with Bose 700.

700’s have a slightly bigger soundstage, but worse imaging compared to WH-1000XM4. The latter also supports 360 Reality Audio surround sound and can boost the sound quality of compressed audio formats with the DSEE HX Extreme feature.

When it comes to sound manipulation, Sony is also much better with its mobile app. EQ inside Sony Headphone Connect app is much more in-depth than Bose, with lots of presets that you can toggle through. 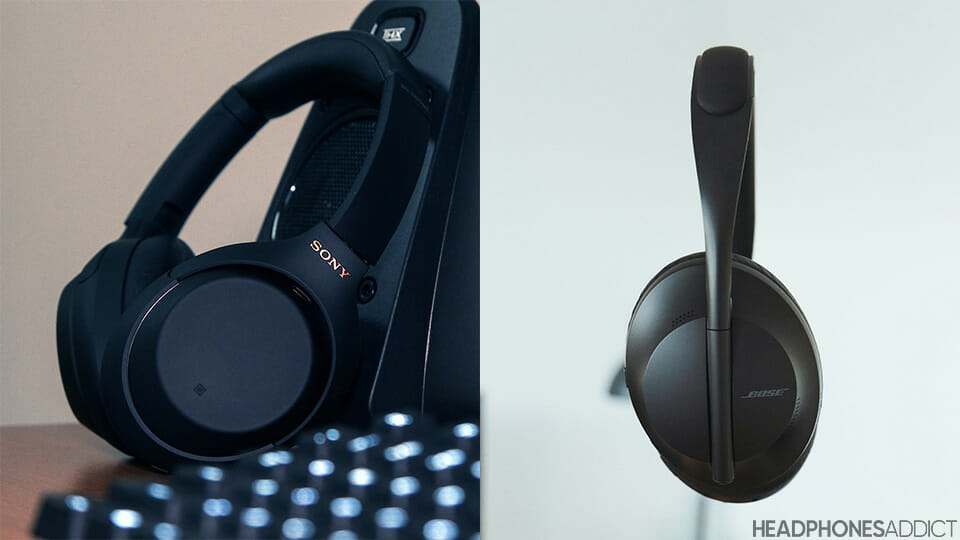 Should You Get Sony WH-1000XM4 vs. Bose Noise Cancelling Headphones 700?

Bose Noise Cancelling Headphones 700 are, without the doubt, more elegant, modern-looking headphones that feel premium and have overall the best ANC performance (if you take phone calls into account).

However, everything else is dominated by Sony and the WH-1000XM4. Comfort, sound quality, features, battery. For a casual user who wants the whole package, XM4 are a far better choice.

Especially when you look at the current price, despite Bose 700 being already old (by today’s standards), they’re still $30 more expensive than the latest and greatest from Sony. And for the price of almost $400, users have every right to expect the full package.

Sony WH-1000XM4 are just a few months old, and maybe with a few firmware updates, they can get even better. On the other hand, Bose 700 probably peaked and soon replaced with something new. Hopefully, with something even better than XM4.