Can You Wear Headphones in a Race?

Is it against the rules to wear headphones in a race?

Wearing headphones while running feels like a normal thing to do. If you love to be entertained while you run, putting on music or a podcast is ideal.

However, it isn’t always possible to wear headphones in a race.

Some places have banned the practice, some allow it, and in some competitions, it is merely “frowned upon.”

So, can you wear headphones when racing? Even if you can, should you wear your headphones or leave your ears open to potential dangers?

Rules for Wearing Headphones in a Race

Headphones used to be banned from all USATF (U.S.A Track and Field) races.

They changed the rules in 2008. Now you can start wearing headphones.

This only applies if you are not competing for any awards or prize money.

A professional athlete trying to win the race is not allowed.

However, if you are running for fun, beating a personal time or for sponsorship, it is allowed.

Some races still don’t like you to wear headphones at the event.

Bay to Breakers organizers, arguably the largest run in California (if not the USA), advise against wearing headphones and music devices. But they aren’t banned.

For one of the biggest runs in Australia, City2Surf, organizers advise to refrain from wearing headphones. But you won’t be disqualified if you do (it would be a shame to waste the entry fee).

Likewise in Cursa El Corte Ingles, one of the biggest (supposedly 2nd most popular in the world with 100k+ runners) races in Europe, you’re allowed to wear headphones though it’s advised against it.

Credit: Bhautik Joshi | Bay to Breakers run often includes runners in costumes and some even naked.

The only time you shouldn’t wear headphones is if you plan on attacking the first few spots and medals.

In that case, the race director may ask you not to wear headphones because abuses happened in the past.

Somebody giving you pace advice over headphones is forbidden and will get you disqualified.

A newbie runner should always check specific rules for each race.

Safety is the main reason why race directors may have objections to wearing headphones in marathons and races.

Headphones weren’t banned just for the sake of it. The idea is that a lot of them block your hearing due to noise isolation. And this means you aren’t able to hear other runners behind you.

In the modern age, some of the best running headphones don’t rely on noise isolation. Options such as bone conduction headphones leave your hearing free.

How to Find Out if a Race Permits Headphones

It’s best not to wait until the day of the race before finding out if your workout headphones are allowed or not. It’s also not a good idea to assume that they are.

While generally you won’t be banned if you wear them, it’s best to check the rules.

Upon registration for a running event or a marathon, you will probably receive an information pack.

This may be an email or sent to you via physical mail. Inside you’ll get your race bib number, and also instructions for the day.

People organizing races know there is a need for running safety tips and advice for their event to run smoothly. The information should be included here.

Most running events often allow headphones for those participating for fun, that aren’t trying to win.

If you can’t find it in the information the race director or planners have sent you, check their website or event page for FAQ.

As a last resort, email the director and ask if you can listen to music during the event. Many will be fine with running headphones, but it is best to check.

Pros and Cons of Wearing Headphones in a Race

There are lots of reasons why wearing headphones in a race can be a positive thing for your mindset. These include:

It isn’t all positive. There are some downsides to wearing headphones in a race:

What If You Can Only Run While Listening to Music?

You can wear headphones but keep extra careful about your surroundings. It will take more energy to do so, and you run a risk of getting into an accident (though small).

Or you go for headphones with good awareness like shallow-fitting ear buds and bone conduction headphones (and keep the volume low).

How to Stay Aware Even If Wearing Headphones

The debate used to be headphones or earbuds and while this is still relevant, bone conduction headphones are a new player. 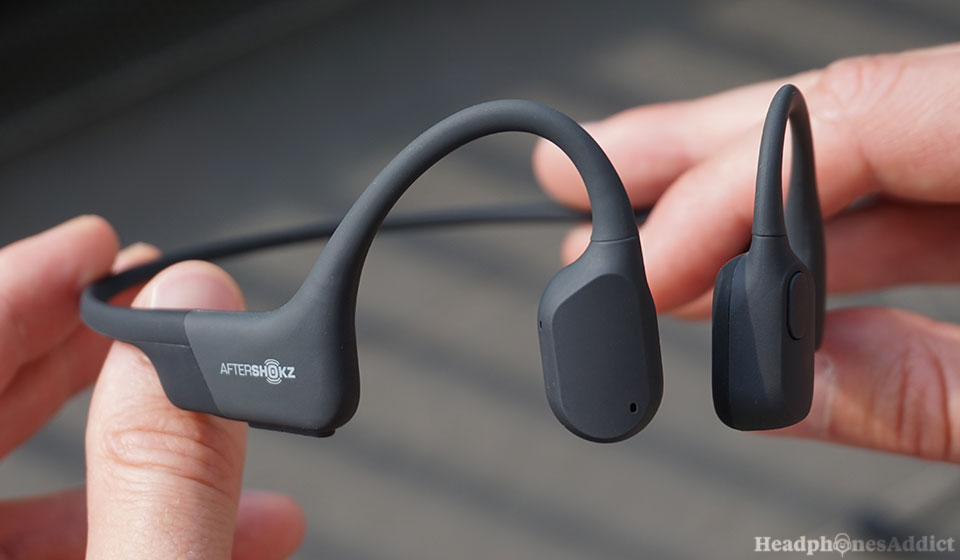 Bone conduction headphones like Aeropex are the best choice for awareness.

Bone conduction options are usually wireless headphones that create sound by vibration through bones. Your ears are completely open to the environment, so you’ll still be able to hear possible dangers and runners behind you.

Other designs are also suitable, though less so. You don’t have to go down the bone conduction route.

You can get classic earphones like the first Apple earbuds that don’t block that much ambient noise.

However, ensure that headphones you plan to wear while running don’t have active noise cancelling if you are racing in public places (these are the most dangerous).

Safety Concerns When Running a Race With Headphones

So, what are the risks of wearing headphones while running a race? They are sometimes banned for good reasons.

In any run, there are certain rules for runners that will make you safer.

Consider the Type of Race

If there are lots of people at the race, and potential safety hazards to listen out for, you should consider whether listening to headphones is suitable.

A big marathon with a huge number of people in attendance can be great fun, and it’s wise to keep aware in the crowd.

Listening to cheering crowds and the energy in the air can be equally fun. Lots of runs include bands with live music and encouraging spectators. Don’t miss on that.

What to Listen For?

Most races will pass without any incident, but you can never be too careful.

Listen to any warnings which may be issued via loudspeakers.

Also, emergency vehicles and supporting cars and motorcycles often accompany the runners. Even strollers can be the way sometimes.

On top of that, don’t forget that faster competitors might be coming from behind trying to overtake you. If you don’t hear them, you’ll get into problems.

A smaller safety concern, for instance, if you have wired headphones which get in the way. You could potentially trip or get distracted trying to free yourself from a tangled cable.

Choosing the Right Headphones for Your Race

You can mitigate some of the issues by choosing the right headphones.

You can find the best running headphones and running earbuds here.