Why Is USB-C Better Than Micro-USB In Headphones?

Nowadays, it’s disappointing to see a Micro-USB port in headphones. There’s better technology available. And even if you’re on a tight budget, your next headphones should come with USB-C charging port. See below why.

Why Change the Port To USB-C?

Micro-USB was already a universally accepted standard. That begs the question: why change it? Well, it has to do with charging speeds. 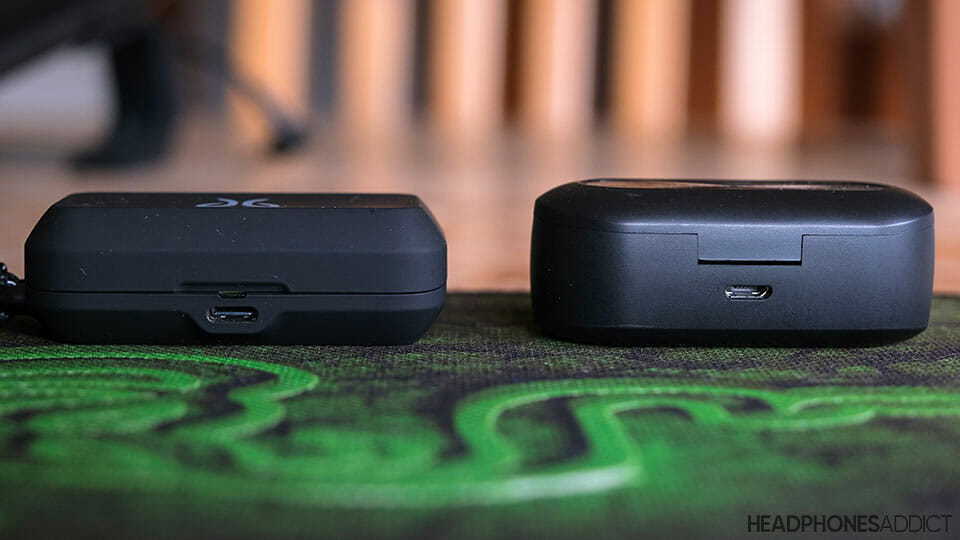 With bigger batteries comes a need for faster charging.

To put these numbers into perspective let’s imagine charging up a device with support for 18W charging. Micro-USB tops at 12W, which gives you around 35% of battery life in 30 minutes.

In contrast, when using a USB-C charger that can deliver full 18W power, you can get 50% in that half an hour. If your device supports even higher charging speeds, the difference will be even more pronounced.

As we all know, many new Bluetooth headphones also support super-fast charging, giving you up to 7 hours of extra battery in just a couple of minutes. While quick charging is possible via Micro-USB, it can’t reach as high speeds as USB type C.

Since today’s gadgets charge from 18W up to an incredible 120W, we desperately needed a new standard. To achieve that kind of power delivery, you also need a power supply that can handle the load.

That was the point when they introduced the USB-C port to the market. It was, and still is, the universal charging standard of today.

Even though people mostly use streaming services to listen to music, some users still prefer to upload audio files to their portable devices manually. And if your music library contains hundreds of songs, a data transfer will complete sooner with USB-C.

With each plugging, the connector becomes looser. You might have noticed an audible click when you plug it in when the cable is new. That clicking sound gets less audible after years of use.

Both cables are rated for 10,000 cycles. However, in some tests, USB type C lasted considerably longer due to the simpler design.

That is why having USB-C on all portable gadgets is essential. Apart from offering faster charging speeds, it’s also the most widespread port on all new USB devices. That means you don’t need to buy or use a separate cable and charger every time you want to fill up a device.

Thankfully, most budget devices also get USB-C ports nowadays. The reason for them being late to the party is the cost. Every part and standard has its price, even Bluetooth codecs.

Not that long ago, implementing a Micro-USB was much cheaper than USB-C. The end product price could be more than $20 higher if the manufacturer decided to upgrade to the latter.

Fortunately, prices have gone down and are now more similar, which gives the manufacturers no excuses to ditch the newer port. 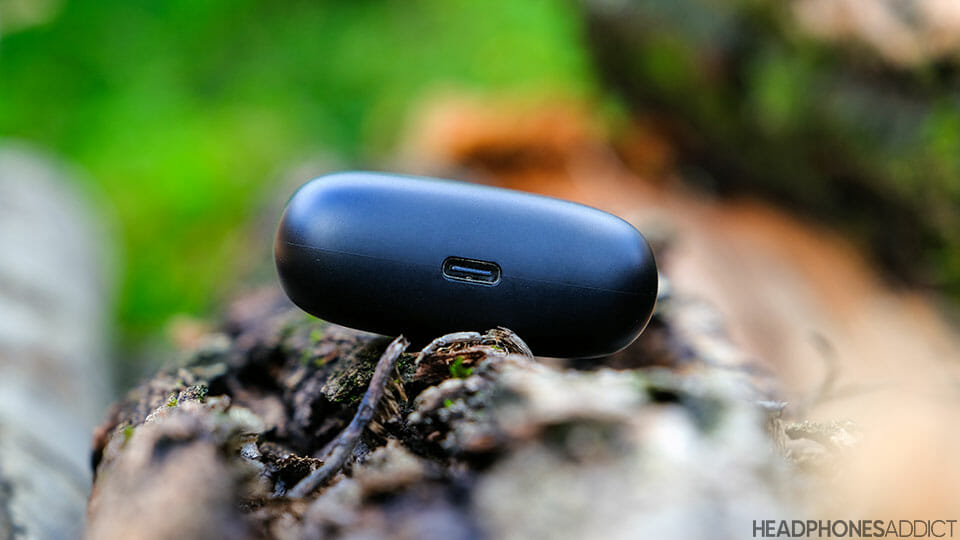 Why Is Having One Universal Port Important?

Not long ago, you had a bunch of various charging cables lying around your house. Each of them had a different connection for charging your portable USB device. Many of them were proprietary and came in different shapes:

But then the world decided on one universal port. Why is that important?

A few years forward and almost every smart gadget received a Micro-USB port for charging and data transfer. Having only one universal port on all devices is better from an environmental standpoint. Since you can use your old charger on new USB-C devices, you don’t have to throw it away.

Another essential benefactor of having only one port to rule them all is practicality. Suddenly, you don’t need to search for specific proprietary connector to juice up your headphones. Instead, you can charge your headphones, smartphone, and laptop with the same cable and charging brick.

The Future of USB-C and Charging

Even though the USB-C offers the fastest speeds for charging and transfer, the future is probably wireless. A great indication of that would be the newest Apple smartphones.

The Cupertino company (Apple) is slowly trying to implement wireless solutions for all charging needs. We’ve already seen their true wireless earbuds that you can fill up wirelessly, check AirPods Pro here.

This trend will escalate when Apple decides to remove their proprietary Lightning port altogether.

Mentioning Apple might seem strange, but their decisions are frequently shaping the gadgets of tomorrow. Because of them, the industry ditched the headphone jack and started focusing on wireless headphones. And they might as well be the ones that will soon change our charging habits.

What About USB-C Audio?

When it became inevitable that the 3.5mm audio jack was a thing of the past, audio companies tried to fill the void with a USB-C connector. You can still get USB-C headphones bundled with some smartphones.

However, people didn’t want to jump on the USB-C audio train. Instead, they were deciding on completely new wireless solutions. Therefore, the trend died as soon as it arrived.

Another solution to the missing 3.5mm audio jack were USB audio dongles. They’re still popular among audio enthusiasts and users who don’t want to go fully wireless. While smartphone manufacturers sell their dongles, they’re usually of subpar quality. That’s is why audiophiles prefer to use third-party ones.

In the case of Apple, their dongle works really well and on all their devices. However, in the Android world, there is a small difference. USB-C dongles don’t always work on all smartphones with a USB-C port.

Some smartphone brands (for example, Huawei) use analog or passive USB-C dongles to send the analog audio to wired headphones. This kind of dongle doesn’t have DAC (digital-to-analog converter) built-in, meaning that the phone itself processes the signal.

The majority of manufacturers sell digital or active USB-C dongles that have a built-in DAC. They burn a bit more of your battery and can get slightly warm. However, the sound quality gets a slight boost.

The biggest problem is that you can’t visually separate between the two dongles, neither do manufacturers specify which is which. That can bring some unwanted compatibility issues.

Modern full-size wireless headphones usually support wired mode if the battery dies. In many cases, they come with a regular 3.5mm or 2.5mm port and a cable already included in the box.

However, sometimes you can plug and play your wireless headphones via USB-C cable. That means you can charge and listen to your headphones simultaneously, using the same cable. Sadly, not many headphones support audio transmission via USB. At least the most popular ones like the Sony WH-1000XM4 don’t. 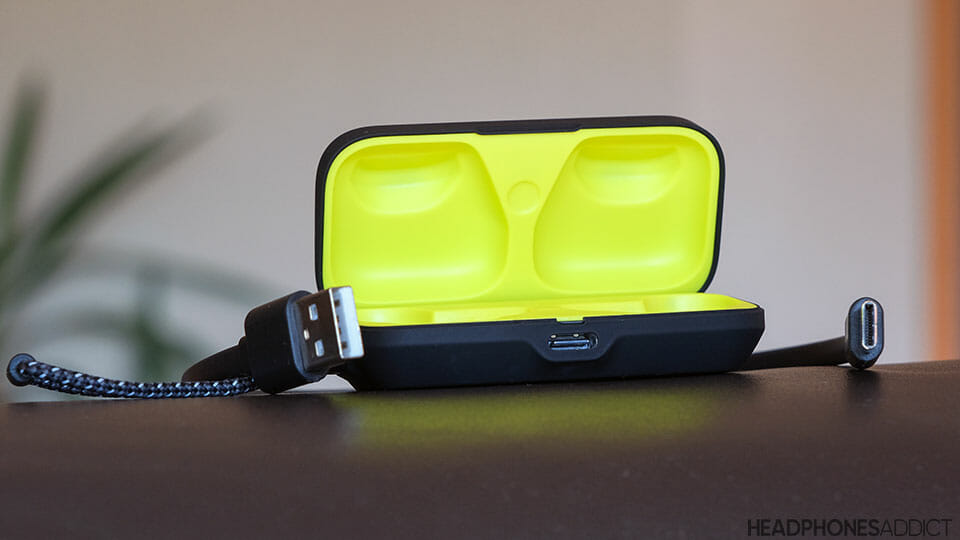 Jaybird Vista are a pair of Bluetooth earbuds that support USB-C charging.

Can You Use USB-C on Micro-USB?

No, due to physical limitations. Firstly, there is a size difference. USB-C port is bigger than Micro-USB. The connectors are also a bit different.

Ports also have different shapes. USB-C can get plugged in both directions, whereas you need to be careful which way is up and down with a Micro-USB port.

The only thing you can do is to buy a separate USB type C to Micro-USB adapter.

Are All USB-C Cables the Same?

Talking about shape, yes. All of them are compatible with each other. However, they might be different in terms of technicality.

Some USB-C cables are built for charging only. Usually, those short cables that come with headphones can charge your device, but can’t transfer data.

On the other hand, cables that come with smartphones can transfer data since the manufacturer expects you to plug your phone into a computer to copy photos and music files.

There is also a difference in speed. There are Thunderbolt 3 cables that have a regular USB type C connector. If you have a USB-C port with a small lightning logo next to it, you most likely have a Thunderbolt 3 port.

The cool thing about that port is that it can simultaneously charge your device and transfer large data quantities. It can also send video and audio data to external devices like displays with up to 5k resolution.

Does Apple Use USB-C?

Apart from iPhones that still use the older Lightning port, many Apple devices support USB type C connection. Primarily Thunderbolt 3, of which we spoke above.

This is a universal connection with many technical advantages, like fast-charging and data transfer at high speeds at the same time. 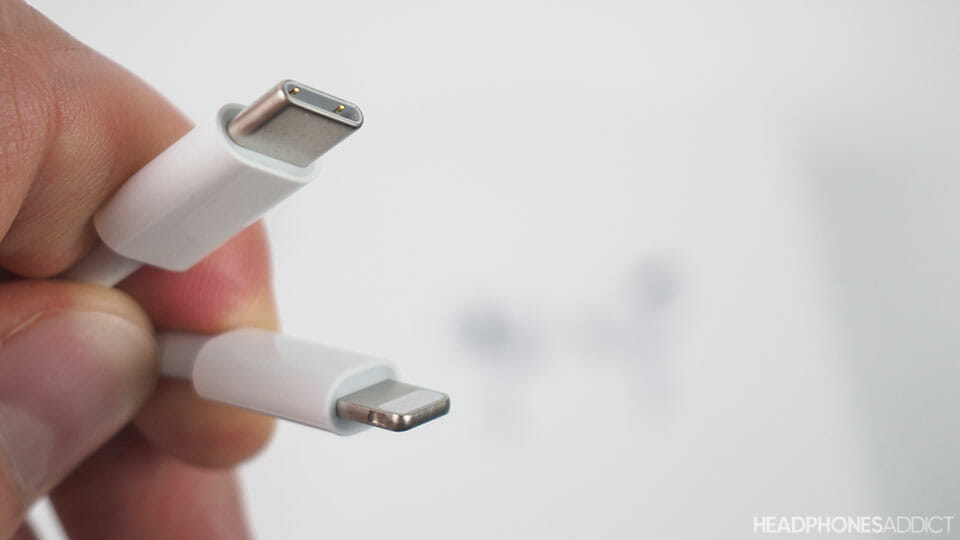 In reality, they shouldn’t, since they both work similarly. Some might argue that USB headphones sound better because they use a digital signal.

However, the world we live in is fully analog, which means that the digital signal will get converted into an analog signal in both cases. The only difference is in DAC (digital-to-analog converter).

The latter is great if you already invested in an expensive high-quality audio system. However, it can be terrible if you drive your headphones via a 3.5mm jack on a low-quality phone.

That is where using USB-C headphones can help since they all come with built-in DAC. Because of that, they’re more consistent with their audio quality, regardless of the source’s quality.