Can this small wireless speaker survive the rough outside and provide enough power?

Conclusion of the Treblab HD77 review

Treblab HD77 Bluetooth speaker is affordable, robust, and made for outdoor use.

You get IPX6 water resistance, which means you can leave it on rain without a problem. It follows a similar design of the popular JBL Bluetooth speakers with a rounded shape and flat sides.

With 25W speakers, it’s louder than you’d expect. It has plenty of power and it’s good enough for a small outdoors party. And if you have 2 of these, you can pair them for a real stereo experience.

Read more about it and how long it lasts below. 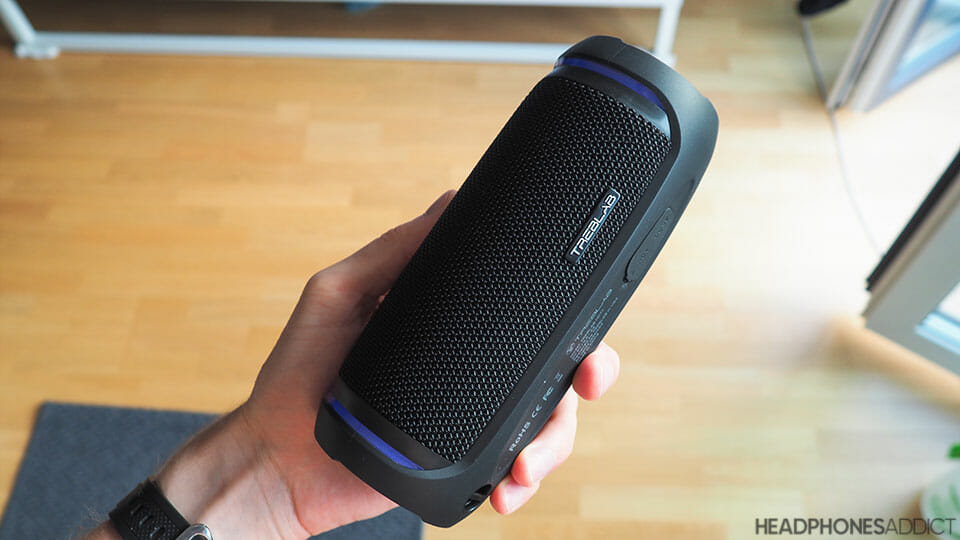 The 5200mAh battery offers around 7 hours per charge at medium volume. It isn’t the longest for a Bluetooth speaker, but better than normal for models this size.

Now, if you listen at max loudness, the battery capacity of 5200mAh runs out sooner. Half the volume will get you around 7 hours on average.

Treblab HD77 is plenty loud. We mostly listened at around 30-40% volume.

You can take it to a beach, on a hiking trip, or a picnic out in the woods. The Bluetooth speaker will have enough power for most cases.

Moreover, when the battery indicator showed around 20% battery left, the voice prompt started saying “battery low.” It repeats itself every 40 seconds or so.

It’s a bit annoying and makes it almost impossible to listen to music with a low battery. After close to 40 minutes at a really low volume, it finally shut down (at max volume it goes to 0% in about 10 minutes). 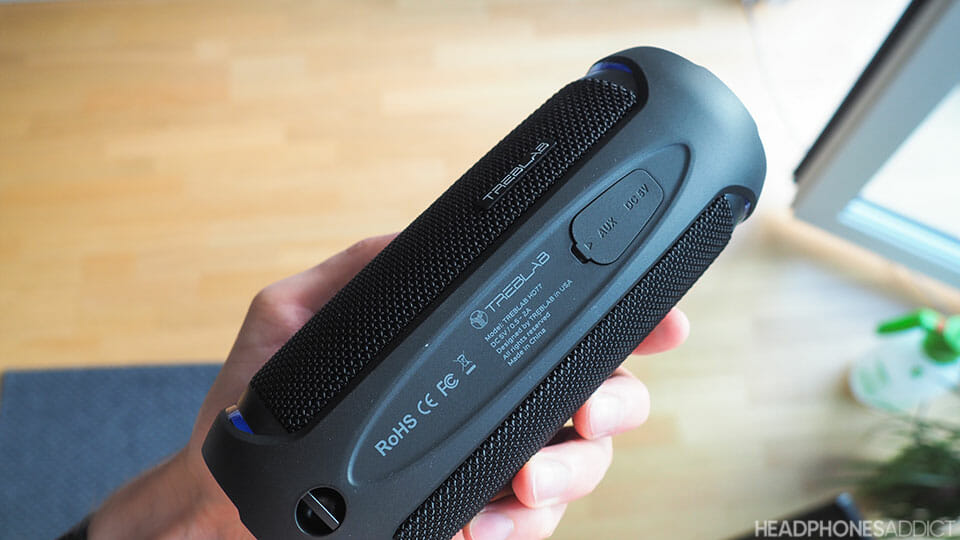 In the user manual, they recommend charging via your laptop’s USB. When you connect the speaker, the LED light turns red.

Charging to 100% takes roughly 4 hours, and once finished, the LED light turns from red to green.

The Treblab HD77 looks well-built and has quite some heft. While it’s mostly plastic, it feels rugged and comes with IPX6 water protection.

The only thing that might be a problem is the fabric mesh that covers the middle section. It’s prone to get chuffed over time. But if you keep decent care of it, it shouldn’t impact the performance.

Now, the IPX6 is quite high up the ladder of water protection. It means the wireless speaker is protected against strong jets of water. That includes rain and splashes of water, but not submersion.

If you accidentally drop it in water for a couple of seconds, it shouldn’t be a problem. Just don’t expect it to survive a prolonged submersion.

Thanks to the design, it enables you to position it vertically or horizontally. Whatever way is more convenient in a given situation.

And if you accidentally bump it, it shouldn’t be a problem. The Treblab speaker is shockproof, and you can tumble it around a bit. 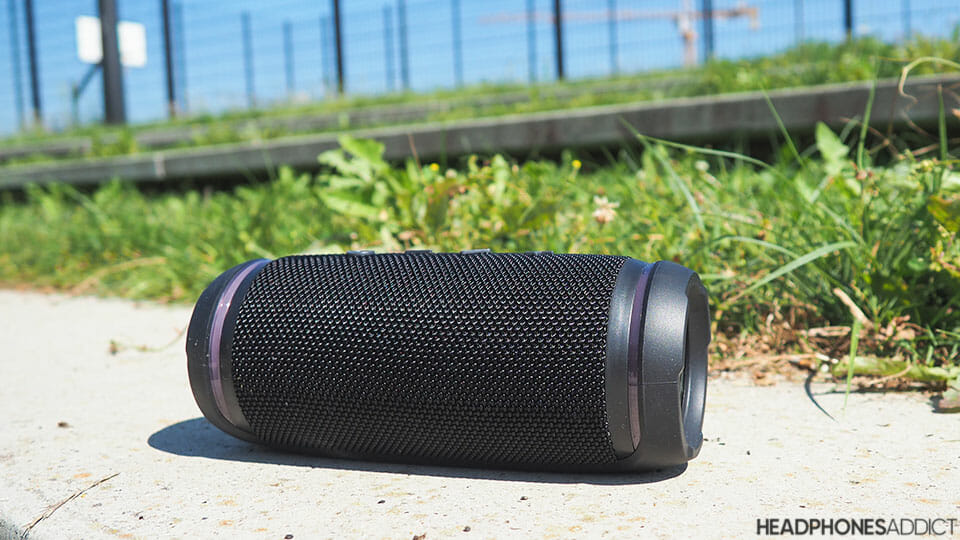 Moreover, the plastic is matte black to avoid visible scratches, which will inevitably happen.

The only thing that would make it even better is IPX7, which some Bluetooth speakers already have.

Treblab HD77 has the standard Bluetooth features, LED lights, the option to connect 2 speakers for stereo sound, and the 3.5mm input, but the built-in microphone is kind of bad. 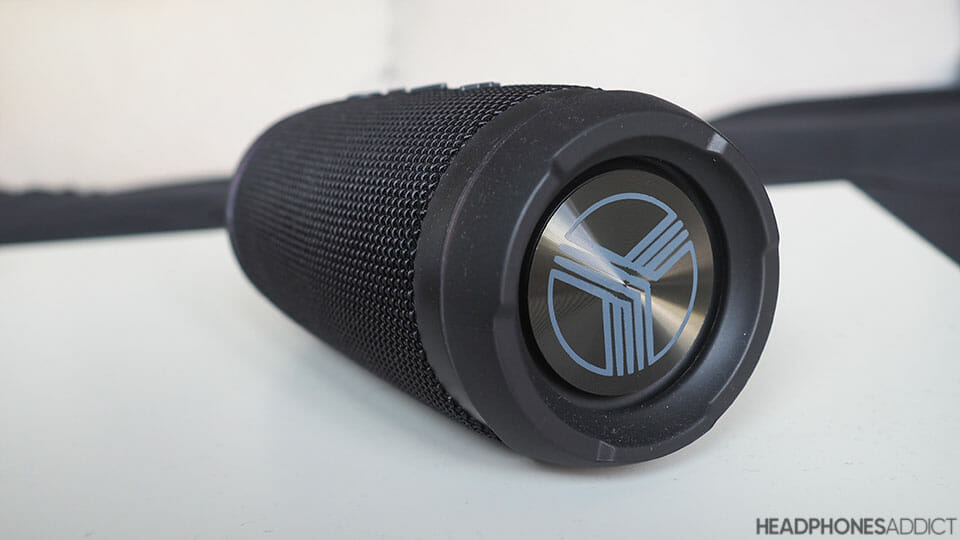 It works out of the box. Turn it on, and it automatically goes to pairing mode. Connecting your iPhone or Android phones couldn’t be easier.

A voice prompt tells you what the speaker is doing at all times, so you’re not confused.

While Bluetooth 4.2 isn’t the latest, it performs similarly in a speaker. You get a reliable connection in the 33 feet (10 m) range.

The LED lights also communicate if the Treblab HD77 is turned on, in pairing mode, or being charged. It also helps you find it in the dark.

The coolest feature is the option to connect 2 speakers for a real stereo experience. It improves the coverage of sound quite a bit, and it adds more power.

Now, the built-in microphone is supposed to have cVc 6.0 noise cancelling technology, but it doesn’t work that well.

When talking with friends in our test with phone calls, we often had to repeat ourselves and were told they can’t hear us clearly.

In the end, we gave up, and our conclusion is that the speaker’s microphone should only be used in a quiet place when your smartphone is far away. Otherwise, just use your phone.

You can also hear a hissing sound in the background.

Also, if you want to save on battery, you can connect it with the 3.5mm AUX cable that you get in the box. Keep in mind, the speaker still needs the power to play music.

Does it work as a power bank?

No, the Treblab HD77 doesn’t have that feature. It also can’t work as an FM radio receiver like some other speakers.

With 25W of power and dual subwoofers, the Treblab HD77 is louder than you’d expect. It keeps music clearer than many other Bluetooth speakers.

They’ve come quite a long way. In the past, they used to be underpowered with lacking details and bass.

Modern Bluetooth speakers, like the HD77, come with dedicated subwoofers that take care of bass together with regular drivers for higher frequencies.

The drivers are positioned on both sides, so it doesn’t matter which way it’s facing.

Despite its smaller size, the bass is quite prominent. You can actually see the subwoofer move during music. While it doesn’t make you feel the rumble in an open space, it sounds decent in a room.

Sound quality is good but nothing special.

The main advantage is its power. Thanks to the combined power of 25W you get a lot of volume from a smaller speaker. It’s perfect for outside use where power matters.

But high volume has its price. Details and clarity suffer as a result, especially at max loudness. This isn’t a Bluetooth speaker for critical listening at home but for blasting some fun tunes out in the woods.

Nonetheless, at lower to medium volume, it’s good enough to enjoy some music at home too. It performs similarly to other speakers with good listening experience.

If you’re looking for a rugged and durable Bluetooth speaker with more power that doesn’t cost an arm and a leg, the Treblab HD77 is a great choice. 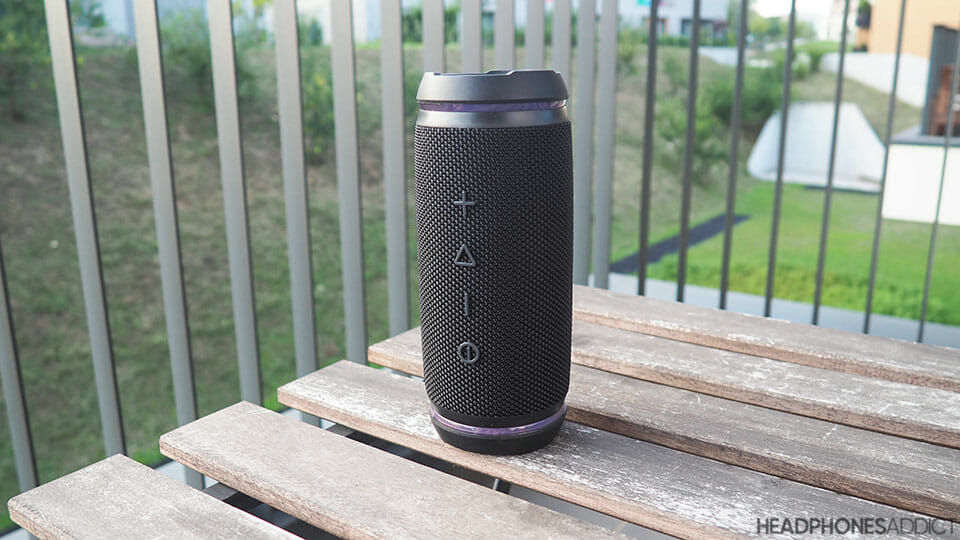 The speaker is a combination of ruggedness and power. It has a lot of power for the size (25W); it’s shockproof and IPX6 waterproof with good battery life.

You can attach it to your backpack or put it next to a pool for some convenient music on the go.

It performs at least as good as some of the more expensive Bluetooth speakers (I’m looking at you, JBL and Bose).

What makes it a great choice is its affordable price under $100. It costs less than comparable Bluetooth speakers from JBL. Plus, it has more power at roughly the same battery.

For a value-conscious user, the Treblab HD77 offers more value than others.