Super cheap gaming headset with suspension headband and LED lights, a good option for any casual gamer, but not for kids. More on this below.

If you’re in the market for a solid cheap headset for gaming, EG3 is one of the best options.

It costs under $30 and offers long-term comfort, durability, and enjoyable sound.

While it’s not a perfect headset and it won’t fit younger kids, it’s a good value for money,

Read more about it below.

Mpow EG3 made it into: 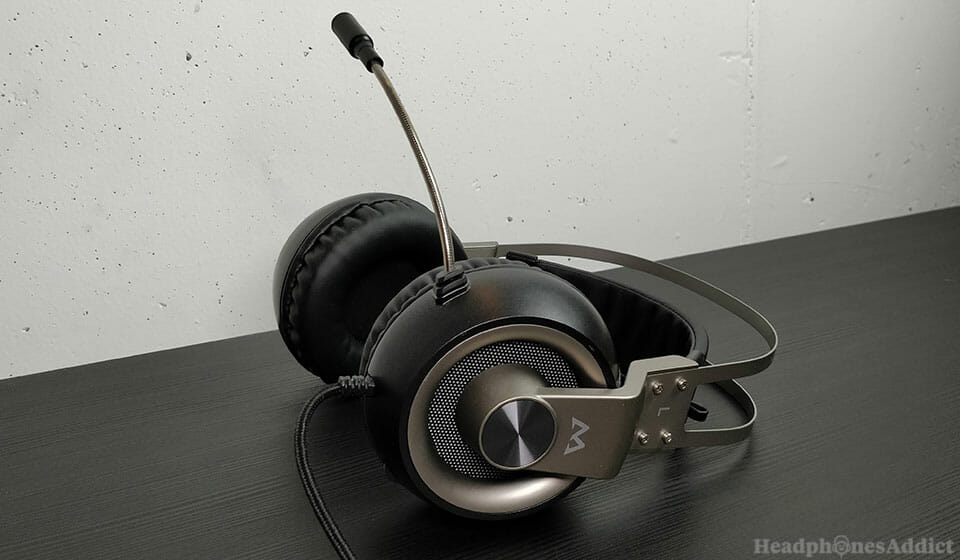 In the box you only get the gaming headset and user manual.

The first thing you notice when putting them on is their loose fit. Sure, they’re comfortable but just don’t feel right, especially on smaller (kids) heads.

After a while though, you’ll forget about it and immerse yourself in your game.

The earpads don’t seem as thick as with comparable gaming headsets. For this reason, you get a feeling the fit isn’t airtight.

It’s almost like wearing semi-open headphones. You can always hear some ambient noise around you. 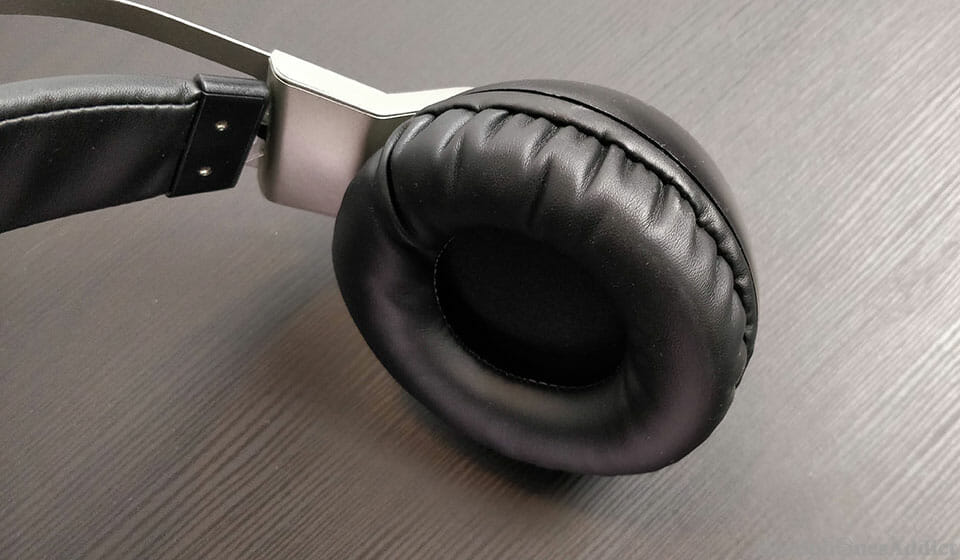 Ear pads are shallow, so the fit isn’t tight.

On the other hand, comfort is not an issue. Because the headset is lightweight and doesn’t pressure your ears, you can wear it for hours.

The headband is strapped on a metal construction that keeps it together. It’s not the same quality as with HyperX Revolver for example but does the job nonetheless.

Also, stability isn’t the best. Due to loos fit you get the feeling the headset might move any moment. It doesn’t actually happen unless you move a lot during gaming.

The last thing, there’s no way to remove the boom microphone, so if you’re playing single-player games, this might annoy you. It’s always in front of you.

Noise isolation in Mpow EG3 is under average due to a loose fit and shallow ear pads. Your ears aren’t encapsulated like with other headsets, but rather loosely sit around your ears.

This might not be a bad thing. You can hear others around you better, but for pure gaming experience, this isn’t preferable.

Likewise, sound leakage is worse, and others will hear more noise from your games than usual.

If you play games alone in the room, this isn’t a problem, but for other cases, it might be. 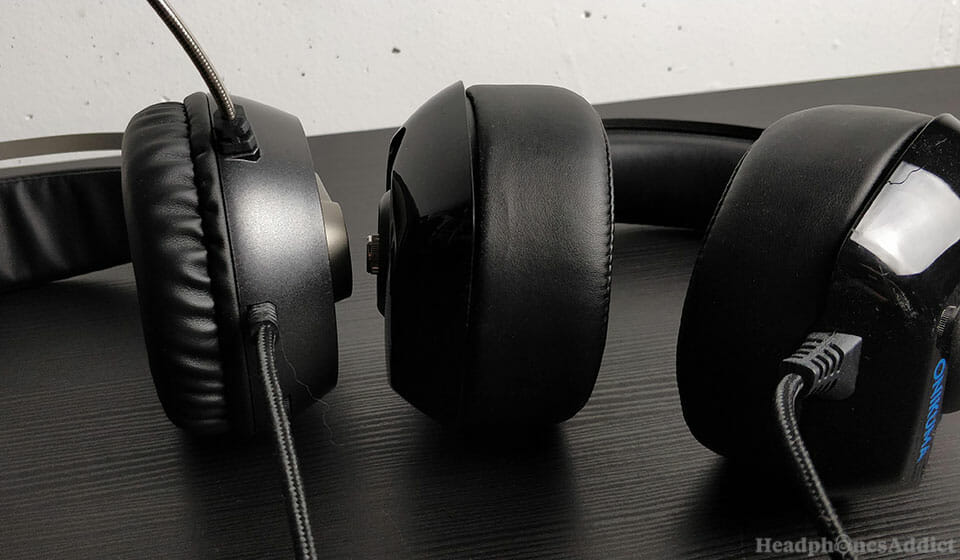 Here’s a comparison of ear pads with Onikuma. 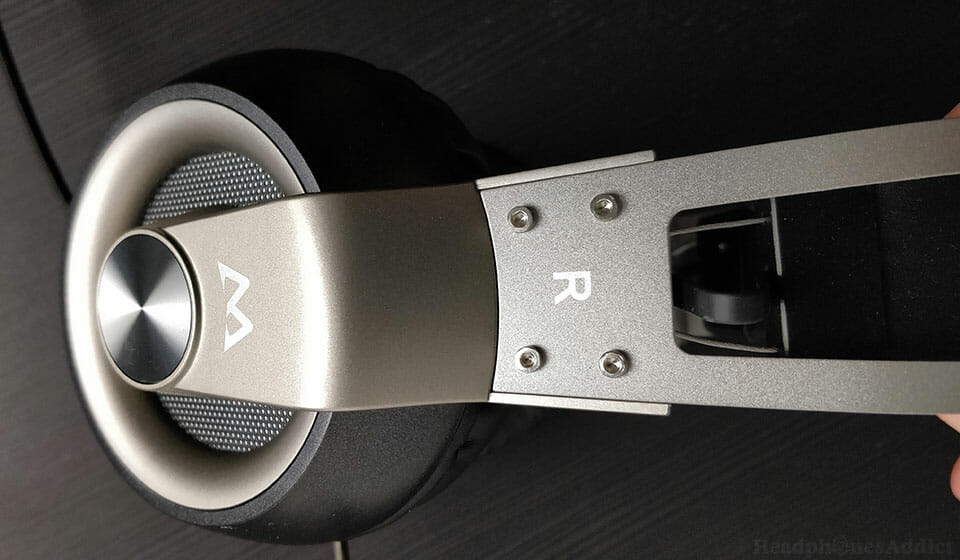 Side markings are clearly visible.

Ear cushions are covered by fake leather and filled by regular foam, not memory foam.

Also, the headband cushion isn’t substantial but doesn’t irritate the top of the head. Remember, they create very little pressure due to a loose fit.

The fabric braided cable is thick and flexible, similar to high-end gaming headsets.

Now looking at the boom microphone, its memory ability enables you to move it in and out of position. If you don’t touch it too much, it shouldn’t be a problem.

The only thing that feels cheap is volume control. It’s just a plastic wheel on the back of the left ear cup. 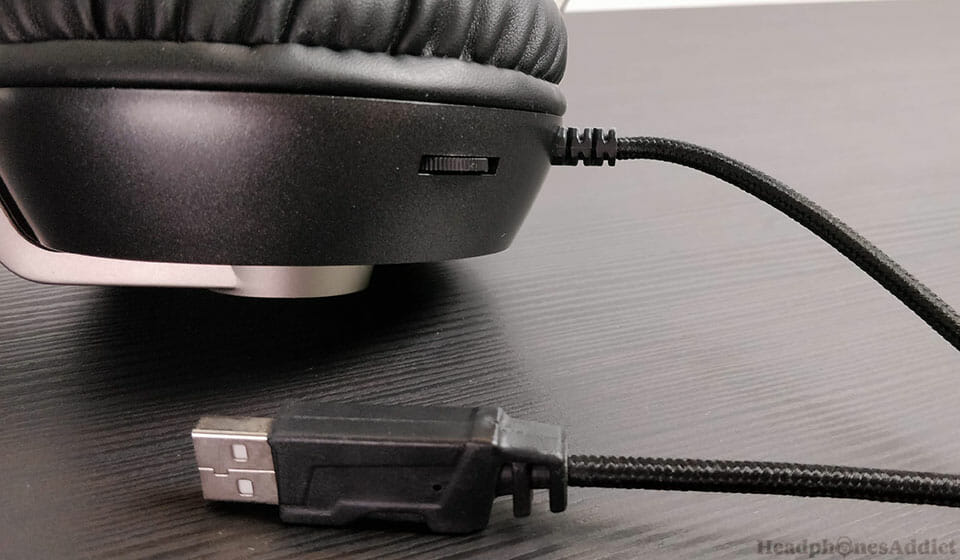 It comes with basic functions like mic mute, volume control and LED lights (that you can’t turn off), but overpromises on virtual surround sound. For a budget gaming headset, you can’t expect more.

Let’s clear one thing first. While this headset is marketed as having support for virtual surround sound, there’s no indication that the software that you download actually includes it.

It doesn’t look like surround sound software, and you only get limited options. You probably don’t need to download it at all. 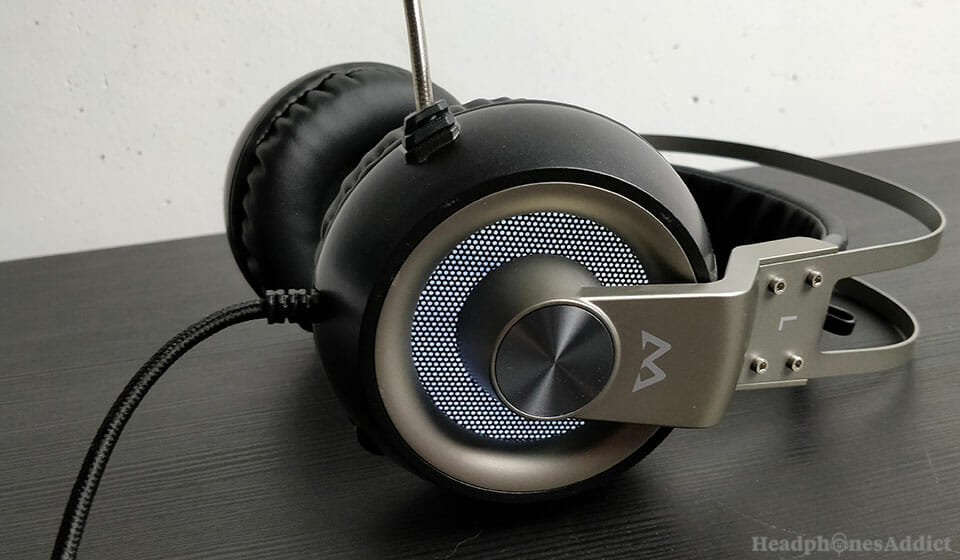 LED lights glow all the time, even when PC is turned off.

Another annoying thing are the always-on LED lights. Even if you turn off your PC, as long as the headset is connected, the lights glow.

It’s a bit of a waste of energy in our opinion and there’s no way to turn them off. Not everybody wants to shine like a magical fairy when playing games.

As for the mic, you can mute it with a switch at the tip of the mic (on/off). It works but having in-line or built-in controls works better.

The boom microphone can be muted with a switch.

Moreover, voice quality is solid. You’ll be able to chat with your friends without problems, and it doesn’t pick up too much background noise (thanks to noise cancelling uni-directional design).

You can also adjust the mic settings with the belonging software.

It has a balanced sound with subdued bass due to a loose fit and otherwise average treble and mids. For the price that you pay, you can be happy with it.

You probably didn’t expect hi-fi sound from this headset as it only costs around $30.

And having said that, you should know the bass isn’t as strong or deep as with some other options.

Playing Subnautica, the noises Reefback Leviathans make are deep and thunderous but with EG3 they’re are more “mild”.

For strong bass, you need a tight fit which this gaming headset doesn’t have.

Nonetheless, the audio quality for the price is good. You’ll more than enjoy playing all types of games, especially if you’re more a casual gamer.

You can download the driver from the Mpow website LINKz, but it doesn’t seem to be for surround sound. It has only stereo sound.

The soundstage is still pretty good, and you’ll have a good idea about where the sounds come from.

The stereo gaming headset is geared towards casual, undemanding gamers, and for their needs, it’s more than good enough.

Now, this is a budget gaming headset, and you shouldn’t expect too much. But for a casual gamer who isn’t requiring top-notch features, it’s perfect.

For the low price you pay (value-for-money score would be 5/5), it’s durable, works out of the box, has all the basic functions (mic mute, volume control) and even additional software if you want to play with settings.

Just keep in mind its fit is a bit loose and isn’t suitable for kids.